Adventures of Apkos: After South Africa, Where Next Will Akpos (Ay Comedian) Take His Next Adventure To

Early this year I correctly predicted the (then) next location Ay Makun was going to take his ionic onscreen character Akpos to. That prediction was way before Ay Makun announced the title of location for 10 days in Sun City. Alot of people thought I had somehow gotten leaks from Ay’s inner cactus, others said Ay had somehow told me but amazingly Ay doesn’t know me, at least not until this post (this is me hoping he will get to know me after this). My prediction was based on simple mathematics not like I like that subject, you could say I got lucky but anyhow am back with another prediction on where Ay Makun will likely take his next adventure to. Official no sequel has been announced as 10 days in Sun City is still doing well in the cinemas (its London premiere is happening this weekend) but like Chidumga Izuzu of Pulse wrote “Nollywood is in the era of sequel” and so it’s safe to say 10 days in Sun City will be getting a sequel. So the question now is where will Akpos journey to this time around, in my previous post dated January 2 days before Ay made his announcement, I named dropped three possible locations Rio Brazil, South Africa and Hollywood California, choosing South Africa as the most favorite and it worked This time I will be sticking with two of my previous options and with the absence of South Africa, I would replace its slot with Miami Florida. 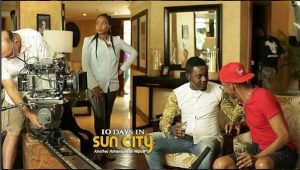 1: Rio, Brazil For the same reasons why i choose it the previous time, Brazil is home to some of the most beautiful women on planet earth and if there’s anything we can take away from the previous movies is that Akpos loves his women. So it wouldn’t be entirely out of place for Akpos to travel to Brazil for his next adventure. He most likely would find a new lover that will last him only to the next sequel. 2: Hollywood, California Like in my previous post, California is the bedrock for everything entertainment in America. We don’t know Akpos might have a friend who resides in California or he could probably go there seeking for a job, may an acting opportunity. Am literally marking out now at the prospective of seeing Ay Makun and Kevin Hart on screen together. 3: Miami, Florida Miami Florida is the new entry into my predictions this time much like Brazil, Florida houses some of the beautiful girls in the world and is one of the place with little or no inhibitions in regards to relationships. Considering the fact that the movie will likely be released during the summer time and Florida being a summer season destination for people Miami might just be the next location beckoning to Akpos. Warri, Delta Another thought just occurred to me, what if Akpos decides to take us to his home town in Warri. This option sounds so enticing and all that, you know paying homage to his grassroots and all that but it most likely won’t be the best idea. Akpos thrives on his uncultured, witty and mischievous behaviors and if he were to go for an adventure in his home town of Warri, breaking a bottle on his head won’t look that interesting like if he did it in Florida, so an adventure in Delta is most like out of the question. Now picking the most likely location for Akpos’s next adventure is prooving really dicey for me, I don’t want to be wrong and at the same time I want to be able to say “didn’t I tell you guys?” 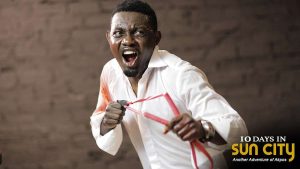 So I will just play safe and pick… Mehn this is thing is more difficult than it was the last time o. Anyways let’s me say! I don’t know maybe Florida, yeah Florida or Brazil, you know all this Caribbean countries maybe Cuba sef. I don’t know. Like they always say “any which way is always a way” “na where belle face we dey follow”, anywhere Akpos decides to take us to we will follow. Let me know where you think ace comedian Ay Makun will take his fictional onscreen character Akpos to next in the comments below.
10 days in Sun City 30 days in Atlanta a trip to jamaica ay makun
-
0
Share on Facebook Share on twitter Game of Thrones: Why Arya Stark…