There is a very thin line between a good film and a mediocre one and most films easily find a home on either side of that line. Either the acting performances are impressive or they leave a lot to be desired. The story is either captivating or makes you roll your eyes to the back of your head. On only a handful of occasions does a film tow that line perfectly and with the grace of a tightrope walker. Those films find themselves in a very rarely charted grey area that boggles the mind. Films like this just leave you confused, because you find yourself simultaneously applauding and groaning at it.
Ayamma is a film that finds itself in this grey area. It is at times a good bit of story telling and at other times, a convoluted mess. Sometimes the characters seem well rounded, but then just go ahead and betray their very being. It is a film that annoys you and impresses you at the same time; it leaves you loving it and hating it in equal measure. Such is the internal conflict that arises from watching Ayamma; a film with a star-studded cast of award-winning actors and produced by Nollywood heavyweight Emem Isong. It shouldn’t make me feel this way, but it does.

Let’s start from the very beginning. Ayammais a “musical” about a young maiden, Iko (Adesua Etomi) who lives in an unnamed village in an unspecified time in the distant past. She, along with a friend, Ituru (Denorah Francis) attend a mini-festival celebrating the arrival of Prince Daraima’s (Wale Ojo) new bride, Princess Ama, played by the impressive Theresa Edem. At the festival, Iko begins to dance, catching the attention of Prince Daraima who is absolutely smitten by her (mostly since he frequently has dreams of both of them singing and frolicking through the forest). Princess Ama, on the other hand, feels the exact opposite and has Iko thrown out of the festival. Sometime after the festival, the king dies from a mysterious illness. Overwrought with grief, Prince Drama bans all music in the village and slowly descends into a deep depression and madness.
In this dysfunctional state, Prince Daraima rejects his new bride and fires all of the palace’s staff, completely ignoring the advice of his younger brother, Ekong (Majid Michel). With all the palace staff gone, Iko and Ituru are hired, further tightening Prince Daraima’s infatuation with and Princess Ama’s hatred for Iko.

The above description is the most that can be given without divulging any important plot points or twists, and there are many, many twists, most of which are rather infuriating. The film’s story starts off very simple so it is clear that there are going to be some reveals and beats that will complicate the story and turn it on its head. Fair play to the film; the story does heighten at particular points. However, the reveals are either too obvious or too far left field and they don’t only turn this story on its head, they also beat it with a stick and set it on fire until what is left are the charred remains of what could have been a good story. Situations are complicated to the point of convolution and characters do things for no discernible reason other than the fact that it was written in the screenplay.
The film is littered with very good acting performances from all those involved, andWale  Ojo and Theresa Edem stand out. All the actors in the film seem to have given 100% to the portrayals of the characters. The only problem is that, with the exception of one or two, the characters they are playing are either rather dull or not adequately developed. You care too little about what they are doing or what happens to them. This coupled with the complete breakdown of the film’s story makes for a rather frustrating watch as you are impressed by the acting performances and the film’s initial premise, but you are let down by the poor characters and confusing twists.
Ayamma is a “Musical” and as such, there is some singing in it, most of which is done by Adesua Etomi in one of the most poorly done voice dubs I have ever heard. Sometimes the character is singing in harmony with herself, which can only mean that she is some kind of mutant. In other instances, there are the voices of backup singers in a scene where no character is singing back up. Where did the voices come from? Heaven only knows. All of these take away from the actual songs being sung, which for the most part, are pretty good even though sometimes they have nothing to do with the scenes they are in.
Ayamma is good, bad and everything in between and that is the real problem. It seems like either a film made by a person without a definitive, locked down vision or a film made by too many people with too many opinions and ideas for what the film should be. 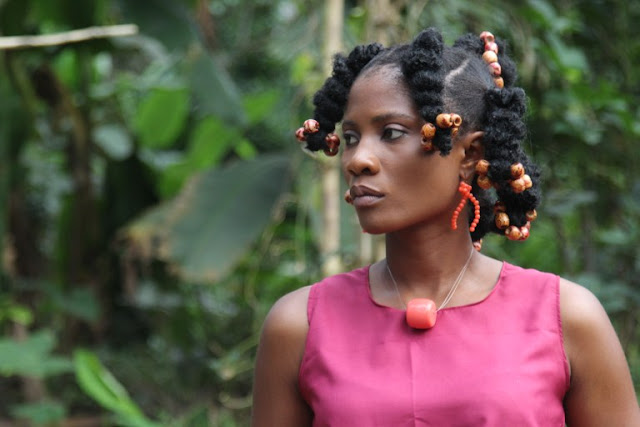