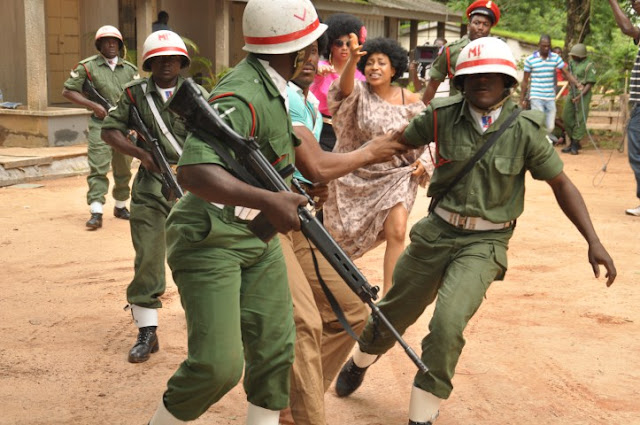 We are in a dimly lit prison cell. We see Ramsey Nouah’s Captain Joseph Dewa, looking battered, bruised and weary. He is joined by a higher-ranking officer who sits across from him and asks him a hard-hitting question: What was his involvement in the recent unsuccessful military coup and assassination of Murtala Mohammed? We are thrown into its world, we are immediately made aware of the stakes, and we care.

776 is a period film set around events that led up to and came after the failed coup attempt of 1976 in Nigeria. In order to cast light on this, we are told the fictional story of Captain Joseph Dewa, a disgruntled soldier who recently arrived at an army barracks in Ibadan to reunite with his very pregnant wife, Suzie (Rita Dominic). He is also welcomed by his old friend and fellow soldier played by Chidi Mokeme who gives a surprisingly impressive performance as Major Gomos. Gomos takes Dewa out for a night in the town where they discuss their mutual dissatisfaction with the country’s military and Gomos invites Dewa to meet him for a secret meeting later that night. Little does Dewa know that he won’t be attending just any odd meeting: he’ll be attending a meeting to discuss a military coup and the assassination of numerous high value targets including the military Head of State, General Murtala Mohammed. Thrown into this coup plot, through no fault of his own, Dewa tries to escape being implicated and expose it, but with even his closest ally a part of it, he’s left not knowing who to trust or who to run to in this truly thrilling story.
There’s a duality to the story told in ’76. Some could say that it is two separate films in one: The first, a thriller about a patriotic soldier unknowingly getting wrapped up in a coup attempt. The second, a drama about the wife of this soldier and how her husband’s service affects her. At around the half way mark, this duality becomes very evident when there is a drastic shift in tone and the pace of the film slows down, drastically. We begin to follow Suzie, seeing the trauma she faces being an army wife and watching her fight for her and the life of her husband. There is a line said by a character in this film that goes something like this; “When a woman marries a soldier, she serves his country along with him.” That line sums up the strongest theme of the film: The wives of soldiers go through as much as their husbands.

Rita Dominic, as Suzie, doesn’t do full justice to the role. She looks the part but the performance merely competent and does not blow you out of the waters. Perhaps it’s more a story problem than a performance one, but Rita is a top actress in her own right and this just wasn’t a top performance. Add to that, the subpar ADR that sucks the life out of almost every scene, and you get a film that can be quite a bit better than it is. How do you spend $3m on a film and the obvious ADR is so off?
This is not to say that it is a bad film. It isn’t. However there are so many little and big things that diminish it. For example, Ramsey Nouah’s Captain Dewa is a character that you watch for close to two hours, but you never really get to know him through his actions; instead we learn everything we know about him through expository dialogue by other characters. The film fails the first test of a true hero with this character.
Of all the various aspects of this film that are good, bad and in between, by far the one thing that will grab your attention and never let go of it is the amazing depiction of Nigeria in the 70s. Everything from the amazing costume design, hair and makeup to Pat Nebo’s exceptional production design will leave anyone watching this in the cinema in awe. To say it is impressive would be a massive understatement. We have known for a while that Pat Nebo is the go-to man for production design, especially for period pieces, but he takes the notch higher in ‘76. Expect him to win all awards in production design next year.

There are a lot of people who will believe that ‘76 is an amazing feat in Nigeria filmmaking. Some may even say that it is a cinematic triumph. I believe it is a very impressive example of how putting a lot of care and a lot of heart into a film can produce something that although not perfect, is truly special.
-
0
Share on Facebook Share on twitter